Markethive is the Epicenter for the Entrepreneurs of the World

MarketHive is an entrepreneurial social marketing platform with the combined strength of LinkedIn, Amazon, Facebook and Marketo. It delivers a complete ecosystem all built within the blockchain.

We have arrived as the first mega social platform Marketing network, secured with block chain and run on Hivecoin (our Markethive Coin).

A few companies are working hard to make Web 3 a reality. A pioneer in the social media and marketing realm is Markethive. The company has successfully bypassed the centralized web services, like AWS and Microsoft, and operates on their own cloud system. Markethive is working on expanding its clouds, called Mining Hives, throughout the world.

This means all data pertaining to Markethive and its users will not be stored on servers owned and controlled by a centralized entity. Instead, it is a distributed database on the Markethive Blockchain with no single point of failure and no internet disruption or censoring by the likes of dictatorial authorities who may decide to shut off the internet.

With the recent news of the U.S. Senate’s proposal to onerously regulate the crypto industry, which will stifle the United States, the importance of decentralization has escalated. It shows that the government views crypto as a real threat and, of course, another way to refill its coffers. This bombshell has the crypto industry in an uproar, with U.S. companies moving offshore to more crypto-friendly countries.

To protect all Markethive associates and continue to build the entrepreneurial ecosystem to bring financial and self-sovereignty, Markethive is in the process of building a new offshore corporation for launching its decentralized exchange (DEX) and wallet. This Web 3 development is an inspiring and timely milestone that should be ready by September this year.

It is a Godsend and a blessing to have a social media and inbound marketing platform empower its community, integrating Blockchain and cryptocurrency in a decentralized environment to circumvent the ‘powers that be” in this ever-darkening world. Markethive will play a prominent role in the re-invention of the social media space to preserve and nurture the entrepreneurial spirit.

On the tails of Markethive’s significant release, “The Wheel Of Fortune” comes “The Boost”. The long awaited release of Markethive’s proprietary portfolio of advertising services has begun.

But The Boost is also a foundational addition to Markethive’s ecosystem and services. Modelled after Facebook’s system, it does allow members to extend their news feed post. Unlike Facebook, Markethive’s standard "News Feed" posts always post to all your friends News Feed (always). There is no algorithm preventing (shadow banning) your publications from your friends and group members here at the Hive. This is where Markethive’s boost parts company with Facebook.

Here is why, The Markethive Boost program allows our members to publish their message to the entire membership of Markethive. Think about that. In the other boost program (FB), you pay on the average $1000 to access your already friends and/or members of your page. People who you worked for and paid to already be part of your sphere. We do not think that is fair or even right.

At Markethive the whole idea of Marketing and Advertising is to reach beyond your friends and associates “borders” and invite new people to join, purchase be aware of your message.

What do you think? And for a limited time, you can use the Boost to send your message into the News Feed of the entire Markethive membership. For just $20. What do you think Facebook would charge for that size reach with their system? Think About It. 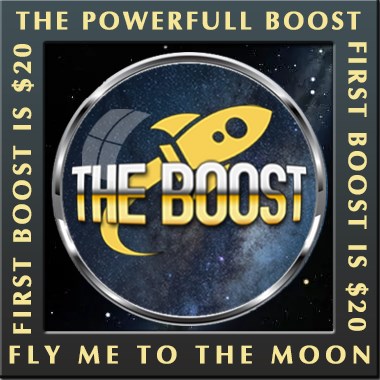 The Markethive Boost will not be prone to algorithmic manipulation and will allow you to Boost outside your boundaries as well for a fraction of the cost. As the Markethive Boost evolves, it will become layered to the level you want it delivered (different prices to deliver via hashtags, keywords, most active, number of friends, etc. (But not via private navigation).

Initially, the Boost will allow you to post on every member’s News Feed for one flat fee for free members and a discounted fee for upgraded Entrepreneur One and Premium members. The standard BOOST prices will be $100 for free members and $50 for upgraded members; however, for the launch, Markethive will offer a first 30 day special that all members may make one Boost post for $20 “All levels.”

If you have an online business, the Markethive system has all the free tools you need to grow your business.

All at your disposal f.r.e.e

Right now you can signup to Markethive for free and receive 500 HiveCoins straight away and all those tools I mentioned above. 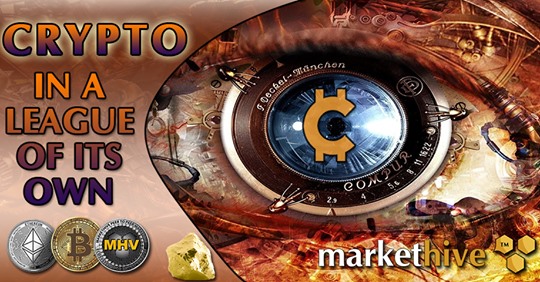 Similarities Of Markethive And Binance

The similarities in many aspects between Binance and Markethive are significant. The Name Markethive is the culmination of the two words, “market” and “hive.” Market is the representation of inbound marketing, product diversity, ecommerce, and Hive represents an active social network of entrepreneurs and collaboration.

It is the first social market broadcasting network built on blockchain technology, with a fungible coin (Hivecoin) that the Markethive community and 3rd parties will utilize. This makes it a complete ecosystem in the social media and marketing niches. Markethive’s mission is to deliver a decentralized and autonomous environment to the masses, free from the oppressive oligopoly that is rife in our online world.

Markethive’s proactive approach in building and relocating to its own servers to counter the agenda-driven withdrawal of hosting services from the major cloud service providers that other platforms fell victim to is just one of the many facets that will ensure Markethive’s solid and sustainable future.

Financial sovereignty and the ability to earn an income, particularly in emerging countries like Africa, is another objective Markethive holds very dear. Dubbed as the Ecosystem For Entrepreneurs, CEO, and Founder of Markethive, Thomas Prendergast lives and works only to lift people up and give them a sanctuary where they can aspire and retire, giving purpose to their lives and livelihoods, realizing their potential.

Tom’s passion for helping others has only increased with the emerging technologies enabling him to deliver a system far beyond what is available today. The Markethive concept was born five years ago and has evolved into a monolithic blockchain and cryptocurrency project much needed in the current landscape of social media and marketing and destined for success.

Thomas Prendergast (as quoted in this article) illustrates why the demand for a blockchain system’s coin is driven by an ecosystem using Binance as an example,

“The Binance community was 122,000 members strong in 2017 when they launched their coin. Our community is double that as we approach launching our coin. Today 4 years later, the community has grown to 15 million. We can expect similar growth. The Binance coin went from 37 satoshis (.10 cents) per coin upon release in 2017 to 10,296 satoshis ($518.83) per coin today as of this writing. Imagine if Binance had developed and delivered ILPs as Markethive has done. We can expect similar results with Markethive when we launch our coin.”

The Markethive Ecosystem will support coin demand and resist traditional pump and dump scenarios typical for any new coin release to the exchanges. The upgrade advertising services like the Banner Impressions Exchange (BIX), Markethive’s Press Release System, Broadcasting system, the Boost, and Video advertising add infinity, as the demand for these state-of-the-art marketing services will only be fundable via the Markethive Hivecoin. The classic supply and demand tradition is the force behind coins rising in value.

Markethive will always be ahead of the curve, introducing new products, systems, and more innovative ways to facilitate operations for users within the social media and marketing environment, including the potential for real financial wealth and abundance on every level for its community.

The latest initiative is the migration from Ethereum to the Cardano blockchain system with its superior technology offering more incredible transaction speed, drastically reduced fees, and exceptional support in co-developing the Markethive wallet. The Markethive blockchain will fork off Cardano’s main chain giving it sovereignty, total decentralization, and the ability to store massive amounts of data, as explained in this article.

The other great thing is the new look Markethive Coin, renamed Hivecoin (HIVE), and the decision to burn a significant amount of the original MHV will reduce the total to 8 million coins. This will not affect any members’ coin holdings in their Coin Clips. What it will do is support greater coin value after our coin is released to the exchanges.

The Markethive vision is built for the people, by the people, and is of the people as they always come first in the company’s eyes. Forget the tech giants of old; the blockchain and cryptocurrency success stories, like Binance, Cardano, and the upcoming next generation of the social market network, Markethive, put crypto businesses in a league of their own. Furthermore, all three companies are synergistic in their mission and vision; all are flawlessly transparent and go beyond the threshold of a typical company.

This Billion Dollar Platform is an Innovative Marketing Solution.

A life changing Event. The Dream of Every living Entrepreneur has come True.

This Billion Dollar Platform is now available to you for Free!!

So, if you are a blogger, business owner, or even an individual involved in any MLMs of Direct Sales Company, network marketer, or just anyone, who has something to let go viral to the entire world, then consider checking out Markethive.

Those that want to make money online or offline are using Markethive to grow their portfolios.

A service that you too can profit from, and for free. 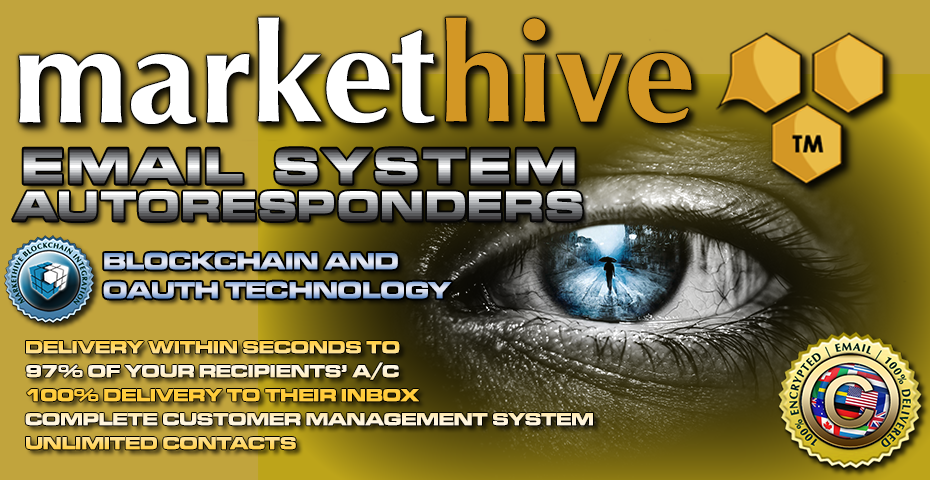 My main autoresponder of choice is the one provided by Markethive.

Markethive does not place any limits on the number of contacts you have or on the number of emails you can send. You can set up multiple autoresponders with multiple funnels for multiple projects – all completely FREE, FOREVER! I'm sure you can see why it's the best option out there.

"The Markethive email system is unique in that our capture technology uses OAuth Technology to capture the data of a potential lead or subscriber. This virtually guarantees the data is legitimate and the email is clean and not from a spam trap often acquired through web site harvesting. The actions available to build email lists in Markethive are via Markethive Capture Widgets, Markethive Capture pages, Markethive Blogs, and Markethive Profile pages. This guarantees email quality unlike anyone else and delivers members of Markethive, their subscribers and lead prospects’ email delivery “to the Inbox” of nearly 100%."

Here’s a snapshot of other autoresponder providers and their limitations. 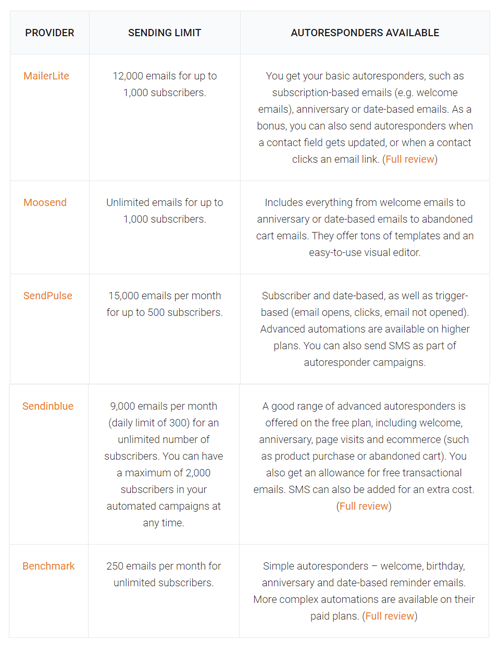 In case you're wondering, the widely popular Mailchimp did not make the cut because their free plan only allows a single autoresponder email but not the creation of an autoresponder series. They do have an email broadcast feature that I use (for newsletters) and really like, however it is a "manual" mailout and not an "auto" responder.

Abide by data protection rules. It is crucial that you stay on the right side of data protection laws. Ensure you have explicit consent before adding people to any autoresponder cycle and always make sure they have the option to easily unsubscribe. You don't want to email people who don't want your emails anyway – it's not going to increase your business.

Don’t Be Annoying. The worst thing to do is to send frequent messages to your contacts without any real value. You will drive them to immediately unsubscribe or worse report your emails as spam. Don't do it. Always ensure you have a reasonable interval between your emails.

If you're an entrepreneur, you'll want to experience Markethive for yourself.

So get signed up today.