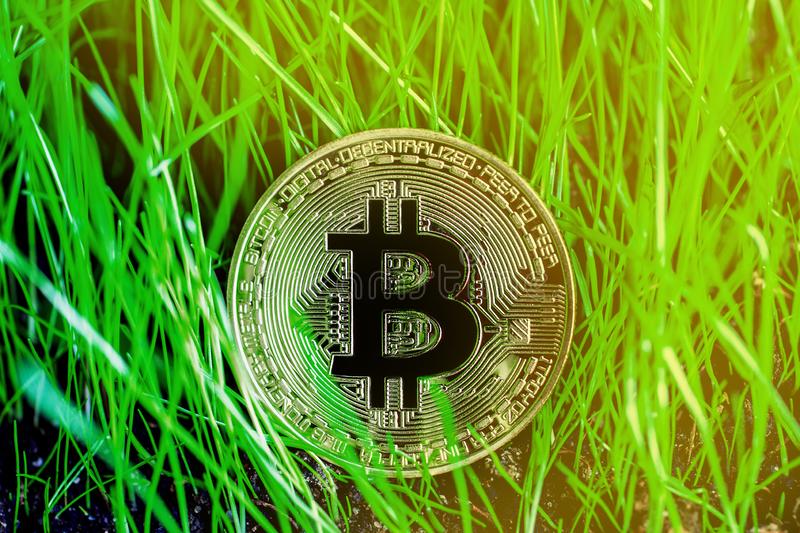 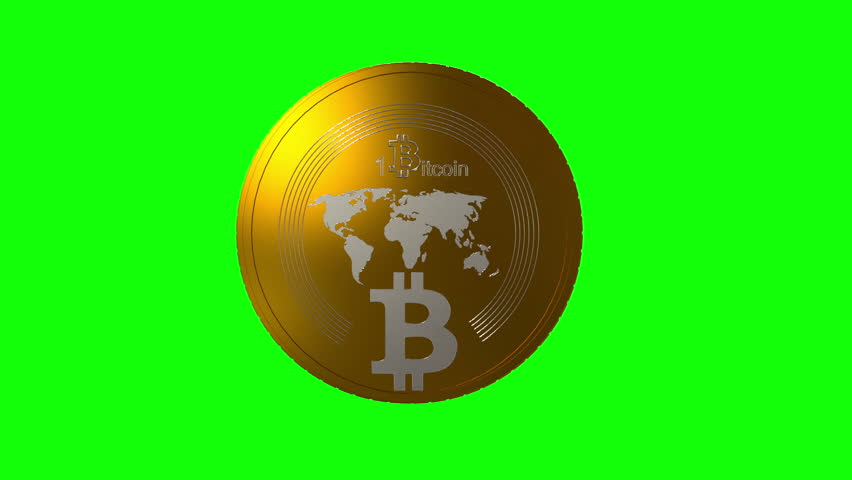 Bitcoin has been dealing with scepticism since its inception. Some theories are wilder than others, but arguably one of the most latched-onto debates has been around Bitcoin’s energy consumption and its alleged harmful level of emissions. Some have even gone so far as to claim that Bitcoin mining emissions could be responsible for the Earth's temperature increasing 2°C over the next 10 years.

But is Bitcoin mining really as dangerous for the environment as some may have you believe? Do a quick Google search of Bitcoin’s energy consumption and you’ll be confounded by a variety of disparate views. Some say it uses the same amount of energy as countries like Switzerland or Georgia, while some say it conserves more energy than the production of traditional fiat currencies.

But what’s the truth? And how is the industry working to minimise its energy usage?

Energy guzzler or not?

Bitcoin mining is necessary for new Bitcoin to be created. It’s the process through which transactions are verified and added to a public ledger known as the Bitcoin blockchain.

Every time a miner verifies a block and it is added to the chain, they are rewarded with Bitcoin. To do this, they must solve a complex computational problem. This is essentially achieved through brute force, relying on computational power to find the solution as quickly as possible – before anyone else gets there.

To solve this problem requires many, many attempts. This requires a significant amount of computational power, which requires specialist hardware, unlike a few years ago when you could get away with using a standard GPU to mine. This hardware uses a lot of energy.

This means that there’s little denying that mining Bitcoin uses a significant amount of energy. According to a CoinShares mining white paper (May 2019), they estimate the total electricity draw of the entire Bitcoin mining industry to be approximately 4.7GW.

It’s difficult to contextualise how much a gigawatt is, so here are some helpful comparisons: 1GW is equivalent to 412 utility-scale wind turbines, or 110 million LED lights. It’s a lot.

Miners, where art thou?

The real question is not whether Bitcoin uses a lot of energy to create, it’s where this energy comes from. According to the aforementioned CoinShares white paper, the Bitcoin network gets 74.1% of its electricity from renewables. This makes it “more renewables-driven than almost every other large-scale industry in the world” –  far more than traditional banking and finance, for instance.

The reliance on renewables becomes clear when you understand where mining activity takes place. Most mining activity is fairly well distributed across the globe, however, there are a few favourable locations in which miners tend to cluster. 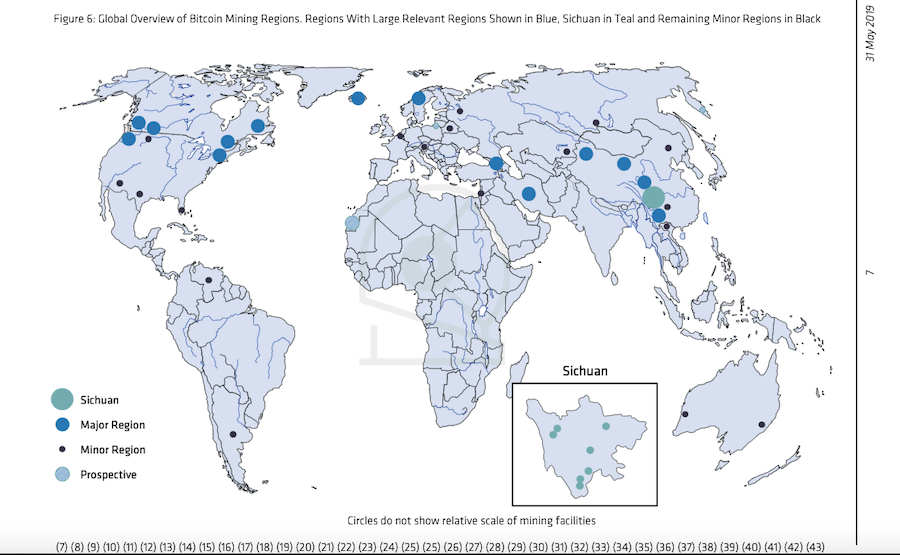 The two geographical clusters of Bitcoin miners can be classified into the following categories: hydro regions and non-hydro regions. As the name implies, hydro mining regions are abundant in hydro-electric power. Non-hydro regions are comprised of a combination of fossil fuels, nuclear, solar and wind generation sources. Some other non-hydro regions, like Xinjiang and Inner Mongolia, are dominated by coal, and supplemented with wind. Iran is an anomaly, making use of natural gasses, which are abundantly available in the area.

This is further supported by research by the International Energy Agency (IEA), who actually go further in noting that this renewable energy would otherwise go unused: “Around 60% to 70% of bitcoin is currently mined in China, where more than two-thirds of electricity generation comes from coal. But bitcoin mining facilities are concentrated in remote areas of China with rich hydro or wind resources (cheap electricity), with about 80% of Chinese bitcoin mining occurring in hydro-rich Sichuan province. These mining facilities may be absorbing overcapacity in some of these regions, using renewable energy that would otherwise be unused, given difficulties in matching these rich wind and hydro resources with demand centres on the coast."

Below it’s clear to see the abundance of available renewable energy and its potential to power the enter Bitcoin network.

So what’s the deal? CoinShares’ assertion that Bitcoin mining is more renewables-driven than almost every other large-scale industry in the world is a bold one given the amount of energy it uses. Perhaps a more useful comparison is how the industry stacks up when compared to gold and traditional finance (see below).

It's clear that while there may be issues, the effort the industry makes to use renewable energy sources where possible is huge. And if you’re still concerned about the amount of energy Bitcoin uses, ask yourself: how many devices do you have at home that are permanently using electricity even when you’re not using them? 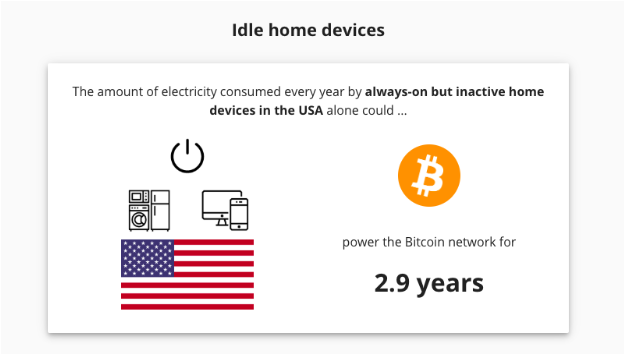 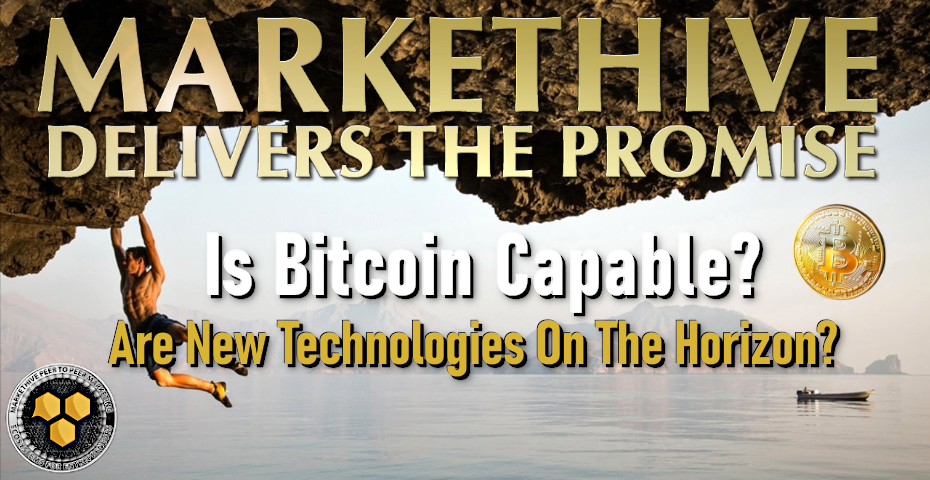