Bitcoin (BTC) Gives A Daily Close Above the Key Resistance, $55,000 In Sight

As the altcoin space is looking for some consolidation after a strong rally, Bitcoin (BTC) seems to be gaining momentum. In the last 24-hours, the world’s largest cryptocurrency has gained nearly 4% moving past $51,500 levels.

More importantly, Bitcoin has managed to give a daily close above $50,750 levels points out crypto analyst Lark Davis.

#bitcoin just put in a daily close above a key area of resistance. Volume was not awesome, but this is a bullish break out and the highest daily close for BTC since mid May. pic.twitter.com/I5QJ0faSzY

Over the last week, while altcoins have been raging for a while, Bitcoin continued to make steady gains. Bitcoin (BTC) gained nearly 8% over the last week amid heightened exchange flows (inflow and outflow combined). As on-chain data provider Santiment reports:

“Bitcoin’s exchange flow activity has calmed, following the massive flow of $BTC moving on & off exchanges between the end of August & early September. This was the largest 7-day stretch of exchange flow since November, 2011 when $BTC bottomed at $2″. 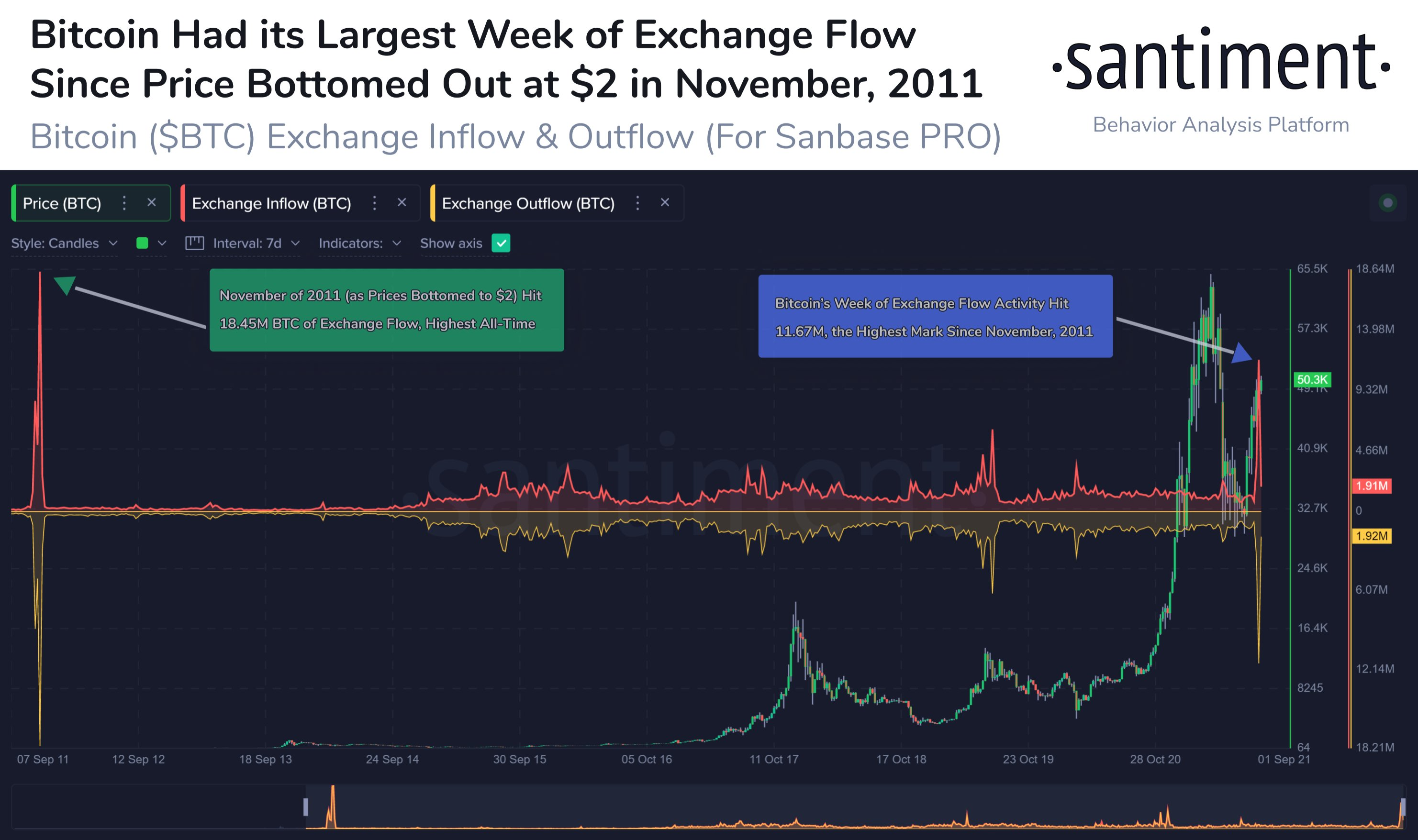 In the near term, Bitcoin (BTC) bulls must be aiming for $52,000 and post that $55,000. The world’s largest cryptocurrency has managed to break past major resistance levels in recent times. Based on the supply shock valuation model, analyst Willy Woo notes that Bitcoin above $55,000 in the near term is very much possible.

Uses a look-back algo to determine what the market priced BTC at prior demand and supply situations.

It's conservative as one of the SS metrics, exchange SS, is now above all-time-high so no look-back is possible. pic.twitter.com/zMuI6AcvZI

As we reported last week, the Bitcoin on-chain activity is also going pretty strong with address activity picking up fast. On the other hand, Bloomberg analyst Mike McGlone predicts that Bitcoin’s road to $100,000 has sort of least resistance.

A number of market analysts have given $100K target for BTC by this year’s end. After slipping under $30,000 in mid-July, Bitcoin has managed to gain another 66% from those lows. It will be interesting to see if Bitcoin moves past its all-time high of $64,000 this month, or we will have to wait a bit more.